Squigly is the last “surviving” member of the Contiello family, a long lineage of opera singers and among the Medicis’ most valued clients. Fourteen years ago, Squigly’s mother Selene obtained the Skull Heart, resulting in Lorenzo Medici ordering an attack on the Contiello family. Fraught with despair, Selene became the Skullgirl and revived her family as an undead army. What spared Squigly from becoming a mindless minion was the intervention of the Parasite Leviathan, the Contiello family’s friend and guardian.

The battle between the Skullgirl and Lorenzo threatened to spread across New Meridian if not for Squigly and the intervention of the ASG. With the Skullgirl’s defeat, the power that animated Squigly faded, putting her to rest. Lorenzo generously paid for the Contiellos’ funeral and has not had conflicts with the Medicis’ other clients since. 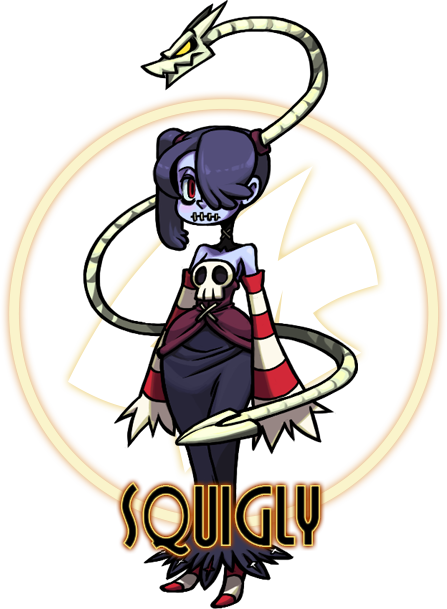